Benign prostatic hyperplasia (BPH) affects approximately 21.3 million men in the United States.1 About 60% of men with bothersome lower urinary tract symptoms (LUTS) secondary to BPH consult with a physician.1 Of those, most undergo watchful waiting or are placed on medical therapy.1 Patients can stay on medication – monotherapy or combination therapy – for years prior to interventional therapy. However, prolonged use of medical therapy is leading to older patients with larger prostate sizes who are being referred for intervention, which increases surgical morbidity and mortality risk.2

As clinicians, why are we waiting so long to provide more lasting relief to LUTS, particularly as medical therapy is associated with potential bothersome or harmful side effects?3-8 Recent guidelines from the American Urological Association (AUA) elevated interventional treatment for LUTS attributable to BPH to first-line therapy for select patients (patients who want to avoid taking a daily medication, have failed medical therapy or who have certain conditions that require more aggressive intervention).9 Importantly, these guidelines also embrace shared decision making for the first time.9 Are we willing to take the time to discuss with patients the benefits and trade-offs of all treatment options for BPH? We should be.

There are numerous medical therapies for BPH, including a1 adrenoceptor antagonists (alpha blockers), 5a-reductase inhibitors (5-ARIs), and phosphodiesterase type-5 inhibitors (PDE5Is), among others.3 The goal of these treatments is to reduce LUTS, delay disease progression, reduce BPH-related complications, and improve quality of life (QoL).3 Although alpha blockers are often considered first-line therapy for LUTS attributable to BPH, they do not affect prostate volume in the transition zone; that is, they do not delay disease progression.3 In addition, alpha blockers are associated with various side effects, such as headache, postural hypotension, fatigue and dizziness.3 As a drug class, 5-ARIs may negatively affect sexual function and can lead to decreased libido, impotence and ejaculatory dysfunction.3 PDE5Is do not appear to affect sexual function but are associated with headache, nasal congestion, back pain, indigestion and gastroesophageal reflux.3 Combination therapy, usually an alpha blocker plus a 5-ARI, is often needed to achieve satisfactory improvement in LUTS, but are associated with a combination of side effects of both medications.3

As it relates to sexual dysfunction, a systematic review and meta-analysis of the effect of medical therapies on ejaculatory dysfunction (EjD) showed that alpha blockers and 5-ARIs increased the odds of EjD by 5.88x and 2.73x, respectively, compared to placebo.4 Interestingly, the efficacy of alpha blockers in terms of symptom reduction seems to come at the cost of sexual function: the greater improvement in symptom relief and flow rate, the higher likelihood of EjD.4 Compared to monotherapy of an alpha blocker or a 5-ARI, combination therapy increased the risk of EjD by threefold.4

We’ve recently been forced to acknowledge that medical therapy, while largely safe and effective, may have lingering negative effects. For instance, sexual function may not improve immediately after discontinuation of some medical therapy. In fact, persistent sexual dysfunction is so commonplace after 5-ARI finasteride has been stopped that there is now a name for this clinical scenario: post-finasteride syndrome (PFS).5 After discontinuation of a 5-ARI in a single-group study of 11,909 men, the median time for persistent erectile dysfunction (ED) was 1,348 days.5

More concerning is the effect on psychiatric and neurocognitive function.5 The 5-alpha reductase enzyme is involved in the production of neuroactive steroids. Testosterone and dihydrotestosterone (DHT)—the targets of 5-ARIs—have an inverse relationship with depression metrics.6 Thus, lower levels of testosterone and DHT, the effect of 5-ARIs, can increase risk of depression.6

A large, retrospective study compared the incidence of self-harm and depression among men aged ≥66 years taking a 5-ARI for BPH (N=93,197) to a propensity-matched control group of men not taking a 5-ARI.6 During the first 18 months of treatment, risk of self-harm significantly increased (hazard ratio [HR] of 1.88).6 After 18 months, the risk of self-harm subsided. Depression also significantly increased (HR of 1.94) during the first 18 months and remained elevated thereafter but to a lesser degree.6 There was no increased risk of suicide among men taking a 5-ARI.6 In another long-term study of finasteride, men taking the 5-ARI had a 10% higher risk of new claims for depression.7

We must also consider adherence, which is generally low for medications prescribed for chronic conditions. In one study of men aged ≥40 years taking an alpha blocker, 5-ARI or combination therapy for at least six months, 10-month adherence was 63%, which decreased to 29% at 12 months.10 Alpha blockers had the highest adherence rate at 35%, followed by 18% for 5-ARIs, and just 9% for combination therapy.10 At a median follow-up of four years, the adherence rate for the overall cohort was 13%.10 Regardless of drug class, stopping medical therapy was an independent risk factor for hospitalization or surgery for BPH.10 While other studies have shown higher adherence rates, we can’t assume that patients, many of whom are likely taking polypharmacy for other conditions, will remain dedicated to treatment regimens.11

The availability of medical therapy has lengthened the time for when men seek interventional treatment for BPH.2 A single center reviewed its prospective database of individuals treated for BPH in March 1998-August 2014 and separated patients into three time periods of treatment.2 Those treated in the latest period (April 2009-August 2014) were older, had larger prostate sizes, and had higher symptom scores compared to the earlier groups (P<0.001 for all metrics).2 Delaying intervention can lead to BPH progression and poorer outcomes, particularly on older patients who often have more comorbidities.2 Older age and larger prostate size, among other factors, are predictive of surgical morbidity and mortality.2 In fact, the single-center experience found that age >72 years, prostate volume >80cc and operative times >95 minute were associated with post-operative urinary incontinence.2

Only about 1% of patients who visit a physician for BPH undergo an interventional procedure.1 Are we doing a disservice to our patients by prolonging medical therapy and subjecting them to drug-related adverse effects?

Many patients would prefer to avoid surgery for BPH.5 Minimally invasive therapies (MITs) may be an attractive treatment option for individuals who may be intimidated by surgery involving general anesthesia. We now have two widely used MITs for BPH: Rezūm™ Water Vapor Therapy and UroLift™ Prostatic Urethral Lift System. Rezūm Therapy uses convective thermal energy transfer (steam injections) to ablate tissue in the target area.12 UroLift is an implantable device that pins back prostatic tissue from obstructing the urethra.13 Both MITs can be performed with local anesthesia in the office setting.14

Rezūm Therapy
In a pivotal trial, Rezūm Therapy lowered International Prostate Symptom Score (IPSS) by 50% at three months compared to 20% reduction in IPSS for the control group (P<0.0001).12 The IPSS improvement for Rezūm patients was sustained at 12 months.12 Peak urinary flow rates (Qmax) increased by 6.2 ml/sec for Rezūm to 16.1 ml/sec at three months.12 IPSS-QoL improved from 4.4 at baseline to 2.3 at three months.12 Significant improvements in these measures were sustained through 12 months.12 There were no clinically significant changes in ED or EjD,12 and no new cases of ED.12 Clinicians should counsel patients that post-operative catherization may be needed for a few days.

Longer-term results of the Rezūm Therapy pivotal trial were presented at the AUA 2020 meeting. At five years, IPSS had improved 48% from baseline, with IPSS-QoL improvement of 46%. Qmax increased 49% from baseline.15 The surgical retreatment rate was only 4.4%; 11.1% of patients initiated BPH medication at five years.15 Potential risks include but are not limited to dysuria, hematuria, hematospermia, decrease in ejaculatory volume, suspected urinary tract infection (UTI), and urinary frequency, retention or urgency.

At five-year follow-up, IPSS improvement was 36% compared to baseline, with IPSS-QoL improvement of 50%.16 Qmax increased 44% from baseline. There were no new cases of ED or EjD.16 The surgical retreatment rate was 13.6%, with some patients receiving additional UroLift implants (4.3%) and others having transurethral resection of the prostate (TURP) or a laser ablation procedure (9.3%).16 At five years, 10.7% of patients initiated medication.16 Potential risks include but are not limited to dysuria, hematuria, pelvic pain, micturition urgency, urinary incontinence, calculus urinary, retention, nocturia and pollakiuria.17

Most men are placed on medical therapy to address LUTS secondary to BPH.1 Medical therapy has a host of potential adverse effects, including dementia and depression.8 We must ask ourselves if we are truly offering the best care for our patients when we place them on medical therapy for years. By waiting a long time, we are increasing the morbidity risk for older patients with larger prostates who undergo an interventional treatment. With MITs that can be performed in the office setting under local anesthesia, we do have treatment options that have proven long-lasting effects on IPSS and Qmax while preserving sexual function. We shouldn’t be delaying intervention. 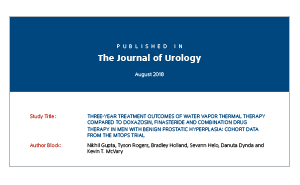 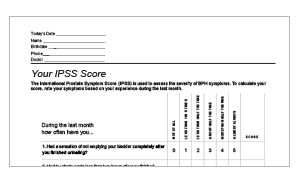 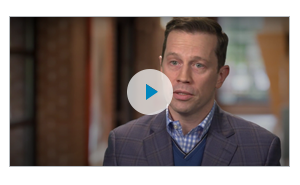 Hear the benefits of early intervention from Dr. Cantrill