Benign prostatic hyperplasia (BPH) is a common age-related disorder characterized by lower urinary tract symptoms (LUTS), such as slow stream, urgency, and nocturia, which can have a negative effect on the quality of life (QoL) of men. Most patients with BPH manage their symptoms through lifestyle modifications or take medical therapy to reduce the frequency or severity of LUTS.1 Despite medical therapy, men may continue to have bothersome LUTS. For these individuals, a minimally invasive therapy (MIT) may be preferred over traditional transurethral surgery in order to facilitate a short recovery period, minimize pain and complications, and enhance QoL.

In terms of choosing an MIT, we must base our decisions on high quality clinical data. For instance, transurethral needle ablation (TUNA) and transurethral microwave therapy (TUMT), early MIT treatments, were quickly adopted but their use declined after 2005, in part because of lack of long-term efficacy.2 The American Urological Association (AUA) no longer recommends TUNA for patients with BPH and notes that the quality of evidence for TUMT is low.3

We believe that high quality published studies must have a stringent and well-defined cohort, have well-matched (preferably randomized) study design, and well-defined outcomes and patient reported outcomes (PRO). We also believe it’s important to include long-term outcomes when evaluating clinical data and selecting an MIT. Some studies focus on short-term outcomes and the immediate post-operative patient experience which is an important part of the patient journey.4 However, we believe that long-term data, which demonstrates the durability of treatment—i.e., whether patients need medical or surgical reintervention—is a more important consideration for the patient journey.

Patients want quick relief of BPH symptoms, but they also want a durable procedure with lasting results. In general, many men prefer a fast, efficient procedure that doesn’t have a negative effect on sexual function. There are two widely used MITs: Rezūm™ Water Vapor Therapy and UroLift™ Prostatic Urethral Lift System. Rezūm Therapy uses convective thermal energy transfer (steam injections) to ablate tissue in the target area.5 UroLift is an implantable device that pins back prostatic tissue from obstructing the urethra. Rezūm Therapy removes the prostate tissue; UroLift pulls some of it back.6 Although there hasn’t been a head-to-head randomized study comparing Rezūm Therapy and UroLift, the pivotal trials for both devices had similar protocols and the cohorts were similar, which makes it possible to infer their relative performance in various domains.5,6

When assessing MIT outcomes, we typically look at International Prostate Symptom Score (IPSS) and IPSS-QoL, patient-reported satisfaction, and preservation of sexual function. Both Rezūm and UroLift significantly improve IPSS at three months. Individuals enrolled in both studies had a baseline IPSS of about 22. Rezūm and UroLift demonstrated similar IPSS improvement of 11.2 and 11.1, respectively, at three months, a decline of 50% compared to baseline. The improvements in IPSS-QoL were comparable. Patients treated with Rezūm had IPSS-QoL of 2.3 at three months from 4.4 at baseline, and patients treated with UroLift averaged IPSS-QoL of 2.4 at three months compared to 4.6 at baseline. Peak urinary flow rates increased by 6.2 ml/sec for Rezūm and by 4.3 ml/sec for UroLift, leading to Qmax of 16.2 ml/sec and 12.3 ml/sec, respectively, at three months. New onset of erectile dysfunction (ED) was not experienced in either trial.5,6

The Rezūm pivotal trial allowed enrollment of men with enlarged median lobes or central zones, which affected 31% of the cohort. [As noted in the McVary et al. 4-year manuscript, “subjects with median lobe enlargement had objective and subjective improvements similar to those subjects without an identified median lobe.”7] The UroLift pivotal trial, on the other hand, excluded men with enlarged median lobes.6 The MedLift study (N=45) evaluated the safety and efficacy of UroLift in men with an obstructive middle lobe who also met the inclusion criteria of the UroLift pivotal trial. IPSS improved by 15.9 at three months, a 64.9% decline from baseline. IPSS-QoL improved to 1.6 at three months compared to 4.9 at baseline. Qmax was 14.6 ml/sec at three months compared to 7.2 ml/sec at baseline.8 Whereas nearly all North American procedures in the UroLift pivotal trial were performed using local anesthesia,6 51% of procedures in MedLift were performed under general anesthesia.8

In long-term follow-up of the pivotal trials, symptom improvement has been maintained for both MITs. At five years, IPSS improved 48% for Rezūm and 36% for UroLift compared to baseline. IPSS-QoL improved 46% for Rezūm and 50% for UroLift. Maximum urinary flow rate (Qmax) increased 49% for Rezum and 44% for UroLift at five-year follow up.9,10

Patient satisfaction is high for both MITs. In a small study which assessed early patient experience, researchers calculated a treatment satisfaction score of 83% for patients who received UroLift (n=30) compared to 65% for Rezum (n=23). The average follow-up period was 30 days.4 This patient satisfaction rate contrasts with that reported by Mooney et al. in a larger study (n=255), in which 93.9% of men who had Rezūm Water Vapor Therapy reported being satisfied or very satisfied with the procedure; 90.9% indicated they were satisfied or very satisfied with the outcome. Nearly all patients (97%) would recommend Rezūm to a friend. The follow-up period for this study spanned four months to 60 months.11 The difference in the patient satisfaction rates for Rezūm may relate to the length of the follow-up period and post-operative catheterization. In the pivotal studies, Rezūm had a post-procedure catheterization rate of 90.4% compared to 51.4% for Urolift.5,6 In the MedLift study of men with obstructive middle lobes, the post-operative catheterization rate for UroLift was 64.4%.8 As discussed in “Patient Journey” below, setting patient expectations often can alleviate patient anxiety related to catheterization. The Mooney study demonstrates that in longer-term follow up, patient satisfaction remains high.11

The difference in surgical retreatment rates is particularly informative with regards to the durability of both MITs. Only 4.4% of men who had Rezūm Therapy had surgical retreatment at five years compared to 13.6% of patients who had UroLift.9,10 (Of the six subjects in the Rezum trial who needed surgical retreatment, four had an enlarged median lobe that was not treated during the index procedure.7) The UroLift surgical retreatment rate is likely understated, as it may not include all surgeries for removal of implants that had become encrusted or were exposed to the bladder (n=13). According to the investigators, these surgeries were only counted as retreatment if additional UroLifts were implanted or if resection occurred.10

An analysis performed by Miller et al. estimated the five-year surgical retreatment rate in the UroLift pivotal study to be 28.9%.12 This meta-analysis of 11 studies examined the frequency of alternate treatments (such as laser), additional UroLift implants, and device explants. Alternate treatment, defined as another form of BPH surgery, was most common, accounting for 51% of reinterventions. Approximately one-third of surgical reinterventions involved implanting additional UroLift devices, with UroLift explants accounting for 19.6% of reinterventions. The authors estimated the surgical reintervention rate to be 6% annually versus 2%-3% that is commonly cited in medical literature.12

A method for assessing durability—combining the minimal clinically important difference (MCID) in symptoms with medical and surgical retreatment rates—recently has been applied to patients enrolled in the Rezūm and UroLift pivotal trials. In the analysis, MCID was defined as IPSS improvement of 3 points from baseline. Treatment durability was then derived by subtracting medical and surgical reintervention rates from the percentage of patients who achieved MCID. The authors found Rezūm to have a higher four-year MCID than UroLift at 82.2% and 79.5%, respectively. Subtracting reintervention rates, the four-year treatment durability rates were 71.8% for Rezūm and 51.7% for UroLift.13

Annual treatment costs for BPH were estimated to be $4 billion in 2006.1 As a result, cost effectiveness of treatments is an important consideration. An analysis performed by Ulchaker et al. evaluated the cost effectiveness of BPH treatments. The analysis assumed that patients initially taking medical therapy needed an MIT after six months if LUTS recurred and that MIT patients would require a repeat MIT or a surgical therapy to treat recurring LUTS at six months. Costs of diagnostic tests, management of AEs, and retreatment were included in the analysis.14

Combination medical therapy had the lowest IPSS improvement with a decrease of 6.2 points in year 2. On the other hand, Rezūm and UroLift reduced IPSS scores by 11.8 points and 9.47 points, respectively, in year 2. The analysis showed that UroLift was associated with the highest LUTS recurrence for MITs per six-month cycle at 4.9% of patients compared to 0.6% for Rezūm. UroLift also was the most expensive BPH treatment at $6,386 at two years compared to $1,736 for combination medical therapy. Rezūm had the highest cost-effectiveness profile of MIT and surgical therapies with continued improvement in LUTS at two years and a total cost of $2,582.14

It is important to set patient expectations prior to Rezūm Therapy. Because of the effect that steam has on tissue, most patients may require post-procedure catheterization for several days due to continued or worsening symptoms during healing. In our experience, setting patient expectation to the possibility of catheterization typically relieves anxiety. When patients return at two-week follow-up, we’re often told that the procedure worked just as we had indicated. With the reduction in LUTS as well as the preservation of sexual function, patient satisfaction is generally high.

Rezūm and UroLift have demonstrated comparable improvement in IPSS, IPSS-QoL and Qmax. Both treatments score high on patient satisfaction and preserve sexual function. Rezūm has been found to be the most cost-effective. UroLift may have a short-term advantage versus Rezūm in terms of post-procedure catheterization. However, many men choose a MIT because they do not wish to have repeated interventions or restart taking medications. The data supports that Rezūm may result in fewer subsequent invasive surgical reinterventions, the exact reasons why men chose a MIT in the first instance. 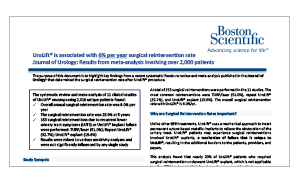